Is Mould the new Summer Cold?

It is what we don’t see, and breathe that matters…

Recently, a client phoned Healthy Building Systems because he feared he may be highly allergic to particular species of mould and following a skin test, conducted by his Naturopath on him, as was suspected, this was the case.

Every morning he was waking up feeling fatigued.  Constantly tired, saying he never seemed to get quality sleep.   Coupled with other mould sensitivity symptoms like lethargy, low energy levels – telling us  “…almost as though I have chronic fatigue!”.

As experienced indoor hygiene environmentalist, specializing in mould and indoor built environments – we knew exactly what to look for.

So we began by asking him a series of probing questions in relation to his home.  Then, with his permission, proceeded to do testing air and surface sampling, moisture levels along with physical inspections for any sort of water ingress or visual mould.

Typically, whenever we analyse for mould we’ll take moisture readings in sub-floors and walls, as levels of moisture are key.   And yet, in this subject’s case, his readings were acceptably quite inside an average range of between 8-10% (….anything above 15-17% is ‘at risk’).

We asked if we could inspect his main bedroom; and our informed assumption was this room was going to be the problem area and primary cause of his health issues – poor sleep patterns, tiredness etc. 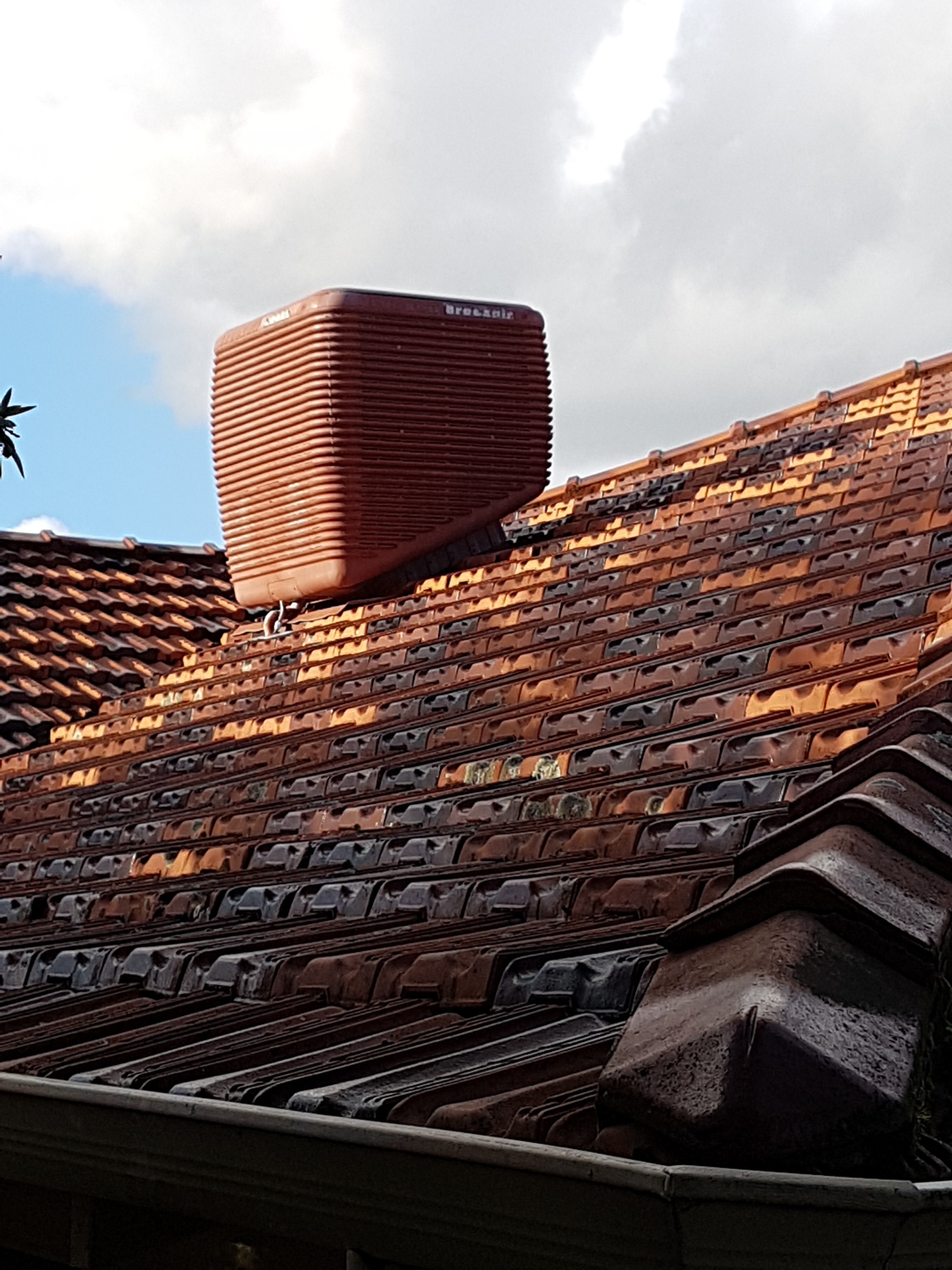 Continuing on with the investigation, we pulled back the carpet, tested under it and likewise testing various the layers of his bedding and mattress also.

You know what is interesting here?

At any point throughout that initial examination, really wasn’t any visible signs of mould or moisture.

On our way into the home,we observed an air-conditioner on the roof – an evaporative system with no cover over the unit.  Client explained he tended to use this mostly through the summer months.

Back in the bedroom, we noticed the main window was open too (approx 100 mm.)

Inspecting around outside his window – nothing else observable which would seemingly cause any issues. 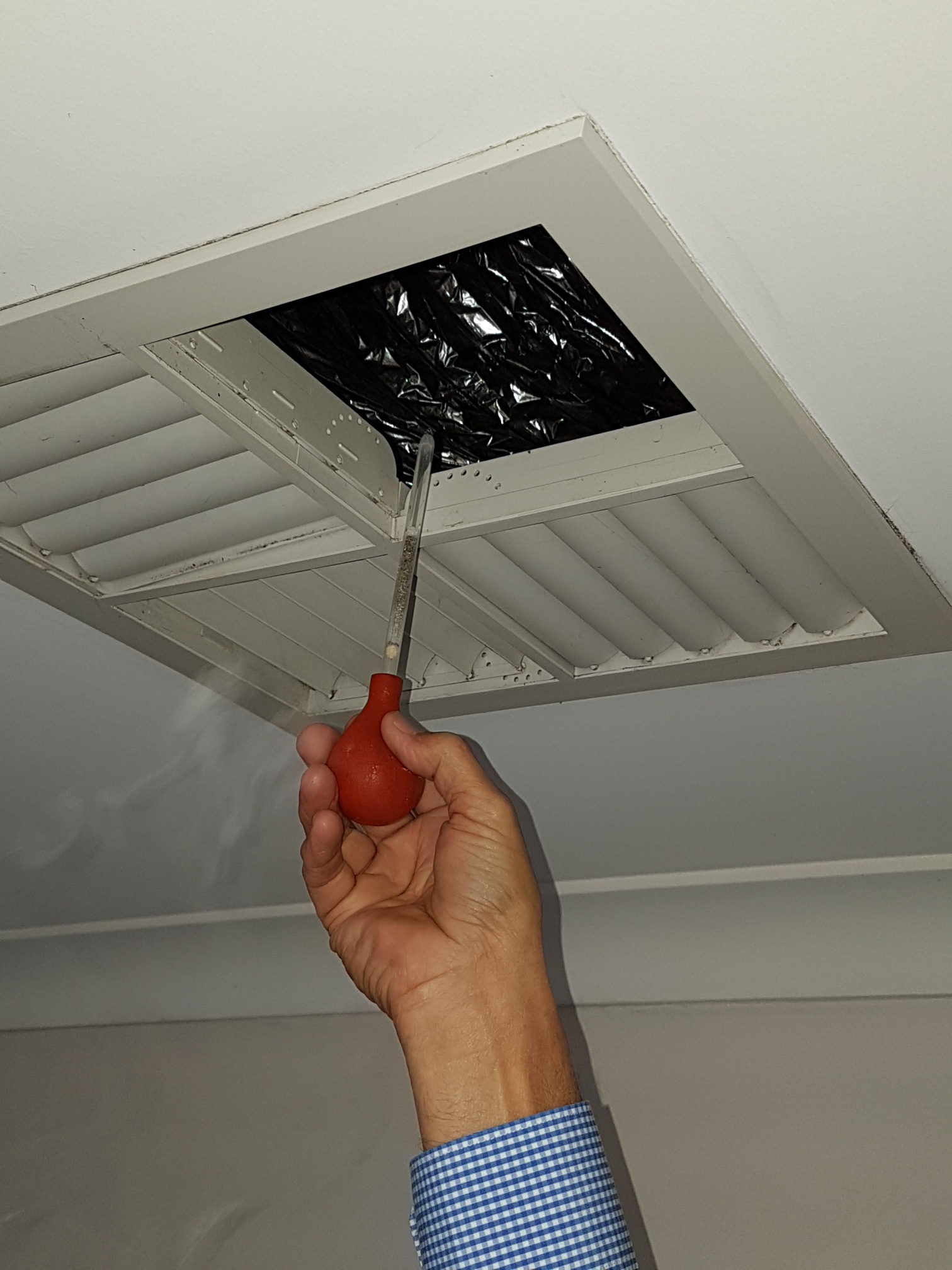 o we proceeded to remove the supply grill (right) and used a smoke stick to indicate airflow moving through the flex duct work and then back out again, into his bedroom.

Placing a surface Rodac plate into the ductwork and taking air samples in bedroom;whilst his bedroom door remained closed.

Purpose of HBS testing (both Air and Surface sampling) with Rodac agar plates is it enables us to send specimens to the Lab for species identification;and that way, we know exactly what we’re dealing with.

Provides us also with valid information on mould present,  the type, and hence a confirmation (or otherwise) against our client’s initial skin patch testing.

Now, we really started to ‘connect the dots’ for him…

Room was being crossed-ventilated (read: contaminated) culprits being the evaporative cooler on the roof cross-ventilating with the open window.

Taking our air and surface samples off to lab, scientists performed mould species identification for our client. 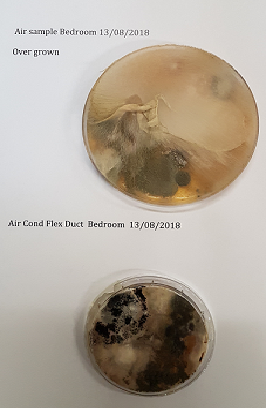 hat came back from air and surface sampling?

Very same mould species in his bedroom that he was highly allergic to.   See samples at left

We followed up with another visit to client’s home; indicating we felt we needed to dig deeper for him.

This time, we wanted to conduct sample testing on both his mattress and pillow sending those off to the Lab too.

Meanwhile we closed off supply vents to his bedroom, sealed up total supply grill to ensure it mitigates any cross-ventilation between the evaporative cooler and the window.

And then waited for the results to come back from Lab on his pillow and mattress testing.

Lab results in hand, we showed the client; what was on his pillow and mattress.

Really quite frightening right?  So we immediately shared with him the series of measures that should happen fast to rectify that.

Client called us back four days later and excitedly told us just how much better he felt and what a quality sleep he was finally getting!

Sleeping all through the night, with clearer breathing, more energy when he gets up in the morning too.

In effect, isn’t this life-changing stuff for him?

There are several important lessons here:

Just how many “summer colds” will there be this year, as soon as people start up their dormant, musty air conditioners following winter? 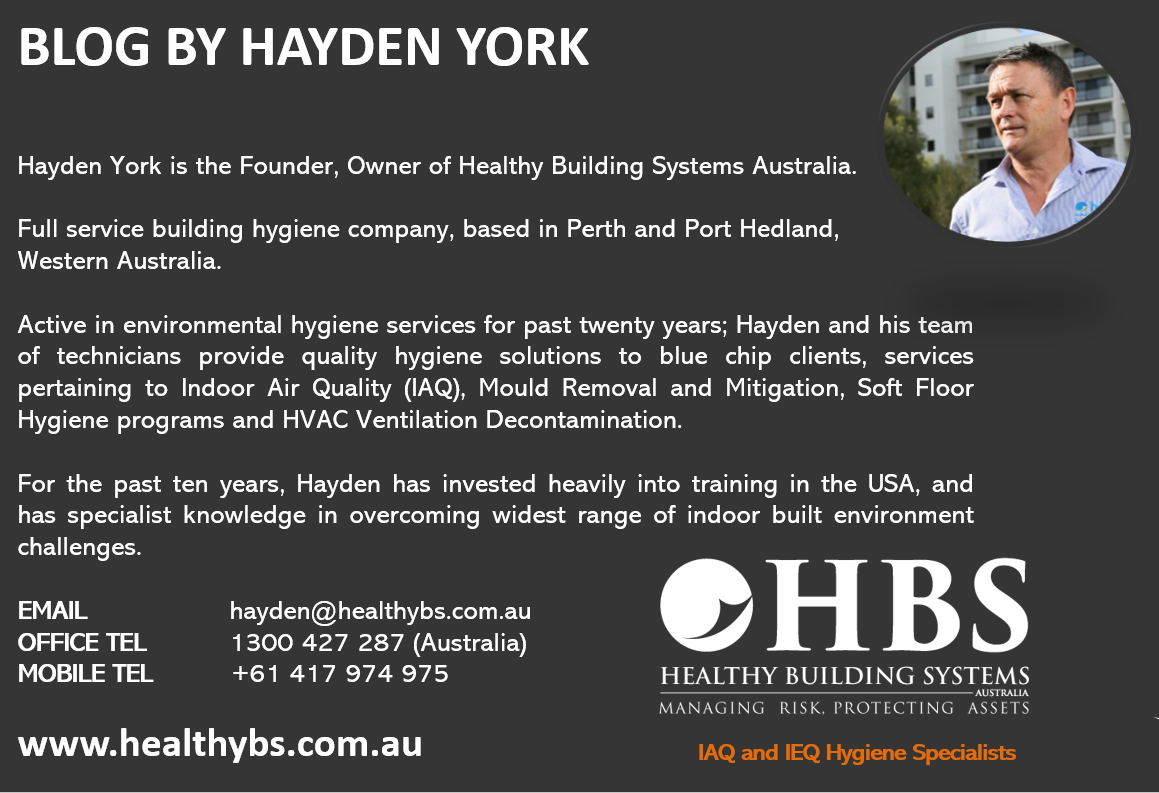